Children are always listening - especially when you think they're not!

“They say you have cancer.” said the little one who had been happily playing in the bath. This is not something I was expecting so I was a bit taken aback but went with honesty in my reply. (I was her nanny)
I told her that yes I had cancer, it’s a disease that can make you very unwell, but the Dr had cut the bad bit out and I was going to be ok.
We have no idea how she knew but she obviously heard it being discussed! 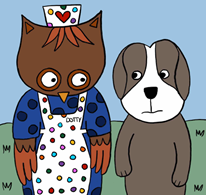 Dave the Dog is worried about coronavirus

As I write this blog we are still under lockdown here in the UK due to the Covid 19 pandemic. Children all over the world will be exposed to an endless stream of information about the pandemic. Most of the information being shared is frightening for us as adults as we enter a new world and a new way of living. Now more than ever we should be making sure we allow children access to the information they need to make sense of what is happening.

Of course, we all want to shield them from the horrendous number of deaths and the fear that we are all experiencing. But, children will be picking up snippets of information from the radio or television, from conversations you are having and from images they are seeing, even if you think you are doing a great job of keeping it all from them.

I remember when I was studying child protection at university and my tutor who had been a social worker told us about children listening to domestic violence and how it can be just as harmful as witnessing it. Adults who thought they were keeping it from their children because they never actually saw what was going on. It all took place behind closed doors, or when the children were in bed. But, she explained that when you can only hear an argument your imagination tends to run away with you and the images you create are often worse than the reality. So, if you think you are hiding your arguments or stresses from them, you will probably find that you're not.

When I worked as a nursery manager in Soho, London a member of my team came to me with concerns about one of her key children. The little boy was around 18 months old and was generally a contented, happy child. But his behaviour had changed. He was withdrawn and became upset very easily. It was clear something was wrong. When I spoke with his mother she told me that her husband was moving out and that the little boy would live with both of them but it wouldn't affect him as they never argued in front of him. I had to tell her it was affecting him as we had noticed a change in his behaviour. She was very surprised. Clearly he was aware that something in his environment wasn't the same and that things were changing.

Speak to your children about things that will directly affect them. Events that are happening and they may be aware of, even if you think they are not. Giving them access to child-friendly information could help to stem any concerns and worries that they have or from manifesting. There are may children's books available now which cover many issues that children have to deal with, death, divorce, living in two different houses and we even have books which cover the current pandemic. You can find lots of useful information about supporting children and young people during Covid 19.